In Search of Britain’s First Knife

In Search of Britain’s First Knife 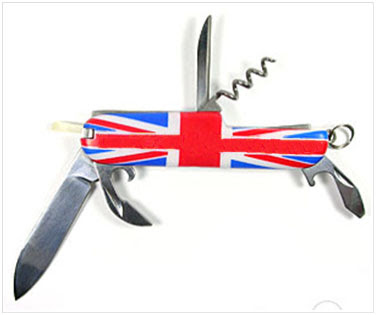 Knives are a diverse species of objet d’art straddling such extremes from the minute bladed craft knife to the rugged Bowie knife, from the hodgepodge that is the Swiss Army Knife to the grim shape of a Kukri, they come in all shapes and sizes from switchblade to carving knife, can be curved, straight bladed, pointed or snub nosed, they can be made of metal, plastic, ceramics, even bamboo and used for cutting, stabbing, throwing, chopping, as a ornament, a status symbol or even in a religious ceremony. So setting out too find the first British knife may not be as straightforward a task as it at first seems, especially when we throw in a huge philosophical discussion on what actually constitutes a knife in the first place. Taking this on board the search for Britain’s first knife is going to be more a journey by the scenic route of prehistoric knif-ish development rather than a concise answer.
Oldowan Flake Tools
Our story starts when a species of monkeys got bored just hanging around in trees and had delusions of grandeur deciding to kick start the whole technological process that one day would lead to splitting the atom and Justin Beiber CD’s. It was about 2.6 million years ago in Oldawan Gorge in Tanzania when the diminutive Homo Hablis hominid species, the aptly named ‘handy man’, one of man’s earliest ancestors made humanity’s first cutting blade by striking a flake off a flint pebble and creating the first knife-like object.

These first flake blades are about as crude as it comes but they were used for cutting the raison d'etre of a knife, so could the search be over already? The first flint blades found in Britain date back over 800,000 years. They were created by an unknown people and so sketchy is our knowledge of these very first Britons even what Hominid species they were is unknown. It’s ironic in many ways living in a country which prides itself on its contribution to science and technology that it has an extensive ban in place on knives, the very item it was man’s desire for that created this whole technology thingy that the modern world is a malaise of in the first place. 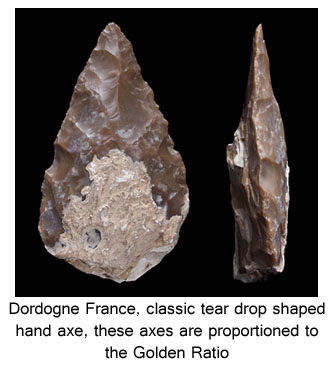 Around 1.7 million years ago a new knife-like tool appeared on the bloc, the magnificent Acheulean Hand Axe, arguably the most inaccurately described thing in history, at least until Ed Miliband described himself as a Socialist that is. Called a ‘hand axe’ the tool was a cutting implement and although varying enormously in shape and size all designs have the quality of having long continuous cutting edges. The Acheulean Hand Axe would continue to be manufactured on and off for a million and a half years giving is the longest use in human existence of any tool and any tool manufactured for that long must have many merits.
While Acheulean hand axes were most likely butchery knives, the mysteries, quirks and out of the box theories you would expect that surround a tool this distant in time and with this longevity are abound. Up until the 18th century hand axes were called thunderbolts and when found in the ground believed to be the tip of a lightning strike. One of the more quirky modern archaeological theories of their use is they were hunting Frisbees thrown at the legs of running animals to bring them down. Hand axe’s size also differ greatly making interesting theorising as in many countries giant handaxes were made, in Britain the largest found is 307mm long. The complete ludicrousness of the size of some hand axes making them impossible to wield show there must have been more than a purely functional use for them, was it art, religion? One archaeologist suggests that is was phallic, the size of the hand axe representing the size of the manhood of the owner, unsurprising the said archaeologist who came up with this interpretation is female and she married a man who drove a 4 by 4. One of the more tangible mysteries of these items though is the phenomena of burying large quantities of unused hand axes together, for religious reasons perhaps? In Britain the Acheulean industry occurred in several locations, most famously Boxgrove around 500,000 years ago and the culprit the unfortunately named Homo Heidelbergensis.

Lithic Core Blades
Another strong candidate would be Lithic Core Blades, these are even called blade knives. These blades are high tech and are created by the systemic removal of long straight blades from prepared flint cores. It is a highly skilled technique dating back possibly as far as 200,000 years ago and was still use by gun flint knappers in England in the twentieth century. Blade cores were used the world over and the blades from these cores were the staple tool of many prehistoric societies being razor sharp and manufacturable in seconds. They would have been used for all tasks imagineable from cutting meat and vegetables to making cloth or even agriculture, the abundant blades would simply be used for a few minutes until blunt, thrown away and another one grabbed. They were the world’s first completely disposable tool.

The technique for making these blades is best described as bloody difficult to do but is extremely ergonomic aswell as virtually the whole flint nodule can be turned into blades with little wastage. Blade core technology proves that Britian did once actually have an efficient industry, just you have to go back two hundred thousand years to find it.
An excellent film of a Brandon knapper making these blades can be seen here.
http://www.youtube.com/watch?v=HgLCXkOv-bc
Microliths

Microliths is a name given to a whole miniature tool kit and includes knife style blades. Being called micro it doesn’t take a degree in linguistics to work out these blades are extremely small however if you regard a doctors scalpel as a knife it would be hard to say these minute scalpel like implements aren’t knives too.
Microliths first appeared around 30,000 years ago in China, when they arrived in Britain is more sketchy, they may have made it before the Dimlington Stadial but they definitely arrived after it during the Mesolithic era where they became the whole basis of technology in Britain for millennia. There are two kinds of microliths, the older Laminar ones which are simple straight blades and later geometric shaped ones. 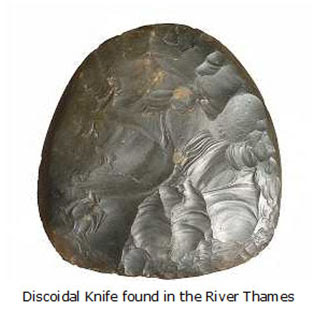 After thousands of years of using microliths people in Britain finally went bugger it they’re too fiddly and concluded they needed something they could get their fingers around, a more sensible design of knife, naturally they came up with a circular one.
Discoidal knives were manufactured in Britain during the Neolithic Era, the rather odd shape does have some logic to it honest! It gives it the longest possible cutting edge possible and as it blunted could just be rotated. Also resharpening would be easier than with a straight blade.
Plano Convex Knives
Plano convex knives or ‘slug knives’ are an especially British knife appearing in the late Neolithic. Plano Convex means flat on one side and rounded on the other. They were manufacture from Blade Core Blades, the inner flat side of the blade being left unknapped and the outer ridged edge being flaked over, this basically made the blade eco friendly as the blades were resharpenable and didn’t need to be disposed of after one use. Slug knives then were officially the beginning of the green movement in Britain and shortly after green and black top bins became common outside all roundhouses. 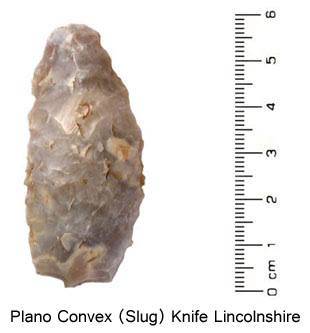 Beaker Daggers
With the coming of the Bronze Age stone technology died...... No actually it didn’t, it boomed, you see metal at first was only available to a few people, the super rich or people good at plundering things from the super rich. Knappers got brand new tools kit including metal tools which improved their knapping quality skyward and a whole lot of custom orders flooded in from the middle classes who couldn’t afford shiny metal things so wanted decent flint imitations. 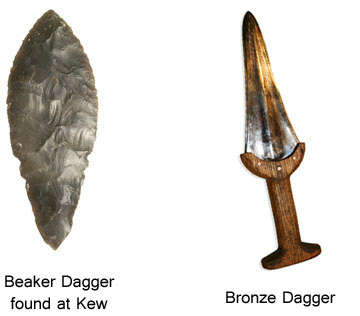 Beaker Daggers were the finest flint knives ever produced in Britain and clearly and indisputably knives. The only problem is they first appeared in the Bronze Age and seem to be imitations of copper or bronze knives. This would rather surreally mean stone technology post dated metal technology.
Beaker daggers are large usually 7-8 inches on average and were hafted with wooden handled similar to the ones bronze and copper knives had. They vary in design but seem to be very wide at the tip and designed for cutting not stabbing, it’s unlikely their use was as a weapon if they even had a use at all beyond that of status symbol.
Non-Conclusion
I set out to discover what Britain’s first knife and have travelled through 2.6 million years in order to do so. Somewhere along the line Britain’s first knife has revealed itself, the question is where? I would guess different readers will have their own views, so I offer no conclusion to this article but instead a question, which is Britain's first knife?
Posted by Paul at 10:53